I recently purchased a couple circular needles for a project and upon receipt, employed them immediately. Not too far into that project I discovered that I needed to change needles due to a gauge issue. When I checked my needle stock, I found I was going to have to purchase needles again to fill that need. I found this really frustrating and decided it was time to update my inventory list on Ravelry, and, if I was going to have to place another order, should really use my inventory list to ascertain gaps that needed filling.

To be sure I was getting an accurate inventory, I cleared the needle list I had in Ravelry and started from zero. I went through all my needle cases. I gathered project bags. I listed each needle, even designating brands. I then created a separate spreadsheet for my circulars that I could color-code and manipulate to get a better handle on gaps and my needs.

I placed my order - a Christmas gift to myself - and purchased needles.

Approximately two hours later, very proud of myself, I had one complete, hyper organized circular collection, complete with laminated reference charts. I was never going to buy duplicates again, I was always going to know not only that I had the needle, but where to find it. I rewarded myself with a little knitting time on the sofa. I settled in, pulled out my project bag and immediately found two circular needles I'd missed, and recently replaced.

Spreadsheets are editable and there is always a knitting friend who can make use of your duplicate needles if you can't find another project to cast on. 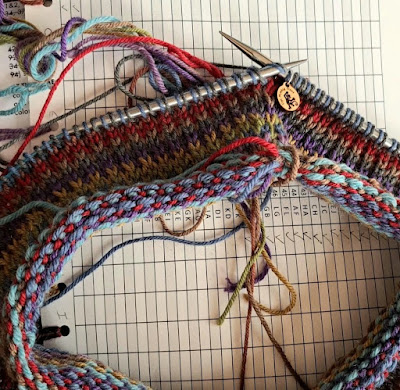 Recently I posted about this sweater. If you look closely, you'll quickly notice that the picture to the left shows a very similar project, but this one lacks a section of ribbing.  Why?

Well, there was a gauge issue. A big one. My swatch and the actual project were one stitch per inch different.

One stitch. Per inch.

One stitch never sounds like a lot, but when you do the math, for this project it meant a difference of 7 inches in chest measurement. Those 7 inches meant my 2" of positive ease were actually 5" of negative ease, effectively creating a wool sausage casing.

I cast on again. This time instead of starting with the neck ribbing, I'm opting to go back and pick up for the neckline. On the last iteration, I found I wasn't entirely happy with the gauge of it against the colorwork and think I'll be better served being able to work it and rip out if necessary later.

So far, I'm much happier with the fabric. It's less dense - did I mention I went UP TWO needle sizes? - and at the larger gauge it's knitting up faster.

My plan is to work down to where I divide for sleeves and try it on. I'll make decisions then. Until I reach that point, I'm carrying all twelve lines, loosely looping carry ups rather than cutting just yet, so as to keep each line fully intact. If I rip back, I'll have full yardage rather than scraps. This means a lot of yarn management. I keep telling myself it's a worthwhile investment and not self inflicted torture. I tell myself a lot of things.

It's going to be amazing.

We've all done it... ambitiously decided to knit gifts for the holidays for family and friends, then realized somewhere around Black Friday that there actually aren't enough hours left to complete all four blankets, six sweaters, and twelve hats. I refer to this as the Knitmare Before Christmas.
How about hats? Maybe socks? A quick shawl instead. Or maybe, surprise your loved ones with the gift that keeps on giving - a knitting pattern they can make themselves!
If this seems like a better path, I've got a treat for you!
Every one of my pattern designs listed for sale on Ravelry is 30% OFF, no coupon code required, until December 31st.
65 designs to choose from!

Many attempts and much math... 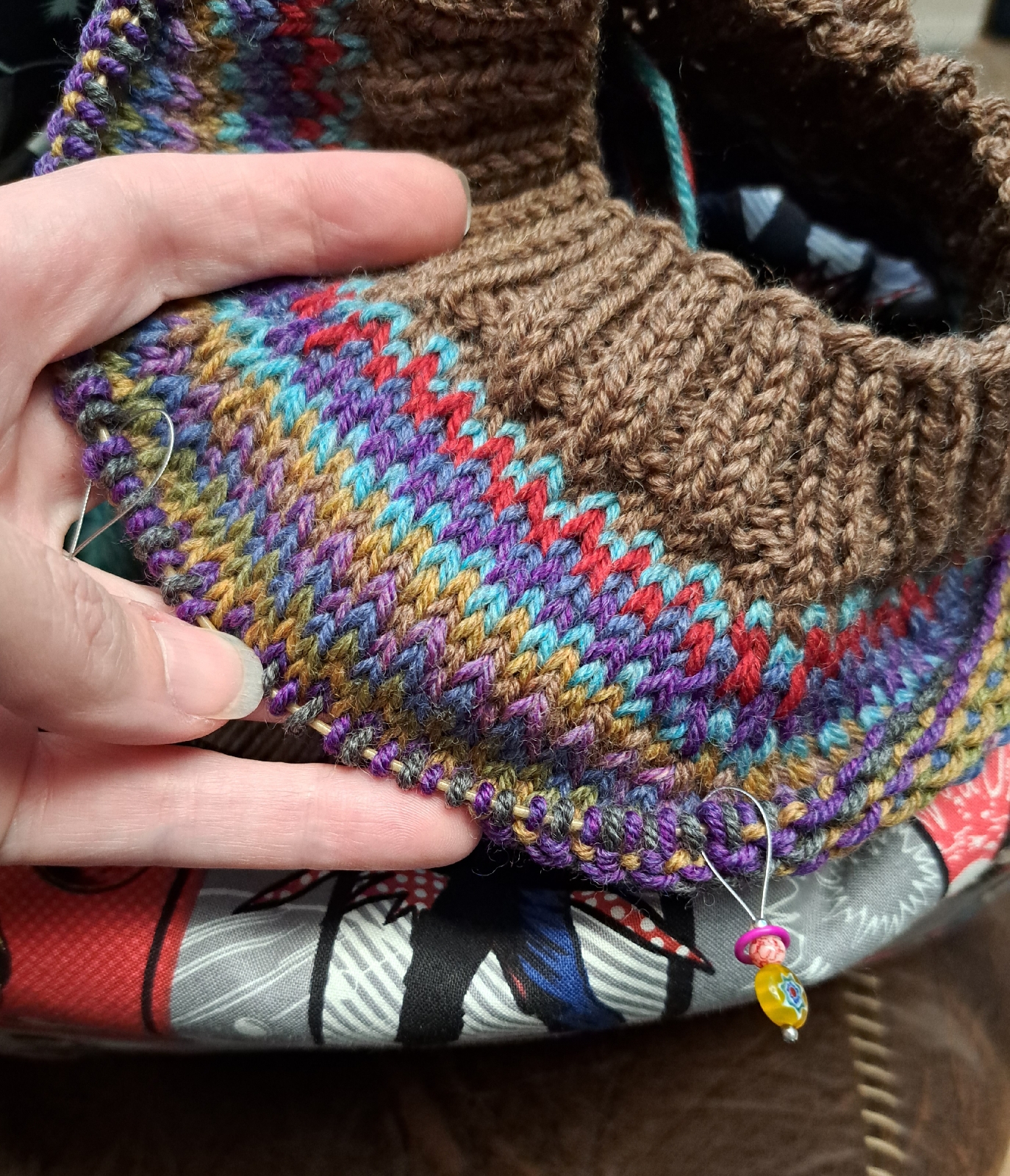 Once upon a time ago I saw a beautiful sweater online and decided it was something I wanted in my life. The Sea Glass Sweater by Wool & Pine captured my heart, however, the original design is a circular yoke,  which doesn't fit my body type well.  No problem. It wasn't the pattern but the look of the colorwork that I wanted. I knew I could readily recreate that look on any pattern, and so I shopped both my stash and online to create a palette of 12 colors for the sweater of my dreams. I selected a pattern from my library from a designer I trusted, created a spreadsheet of the 66 possible color combinations, gauge swatched, and cast on.

I did some research and discovered that many people knitting this project used magic knots. It is important here to note that I don't believe in any "magic" related to knitting. Harry Potter, David Blaine, sure. Knitting, no. Still, four ends to weave in every round of a sweater sure isn't magical, so, why not knots?

I learned how to make the knots. I practiced said knots. I tested the join. I cast on again and made wonderful progress. Then I cut my tails and worked two more rounds. Disaster!!

The minor tensions put on the fabric working those last two rounds was just enough to make all my yarns wiggle out of their knots. All. Every round. Unraveling rainbow of Ramen hell.

Stepping back was imperative to my mental health.

I assessed the issues:
I concluded I needed to find a raglan pattern worked in the round, top down, that doesn't have short rows, and I needed to slightly rework the yarn color changes to make use of each color for two rounds, changing alternately, carrying yarns when the sequence allowed to reduce ends and weaving as much as possible.

This past week I stumbled on a pattern that fit my requirements, and, bonus, was free.

I swatched. I did math to determine which size to work at my gauge. I worked with a friend to determine a repeatable color sequence making use of as many of the 66 possible color combinations as possible (thank you Elizabeth - you are fantastic!), and today I cast on.

If my math holds true, and the knitting gods look favorably on me, having gone so far as to have swatched repeatedly, this might just be spectacular.

Well, this wasn't what you were expecting when you went to my site today, I'm sure. Things have changed, in some cases quite dramatically, and in others, not really all that much.

Dye Monkey Yarns has closed. I am no longer producing yarns. This is the biggest change. That doesn't mean that from time to time I won't be doing exclusive dyes. In fact, I'm looking forward to new adventures with fewer daily demands, which should make more room for fun things. Basically, I'm refocusing to make more room for blogging about my knitting and crafting adventures, more room for pattern design, and more room for enjoying the best crafty life possible.

I hope you will join me on this new journey.