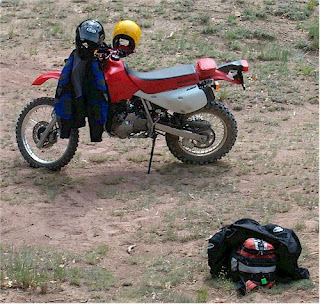 June 26-29 John and I roadtripped from home to Gallup, NM into Arizona, back to Grants, NM and finally home again. We did the whole trip on the dual sport, which means luggage was as much crap as we could stuff into 1.5 cu. ft. backpack without forcing me to tip off the back.

We followed 40 West and got off the highway and onto Route 66 as soon as possible. Riding the highways on the dualsport, two people on and a heavy backpack can be difficult and tiring. The wind whips us about "sumpin' wicked."

Our trip started on a high note - while taking a break and pulling off by a railroad pass on an otherwise deserted dirt road, John found $80 in cash blowing in the breeze. Sadly he also found a deceased pet, but we figured without thumbs, El Gato wasn't going to be spending the money anytime soon, therefore, finders keepers.

Gallup is a trading post Indian town. There are beggars. It is also a primary hub for freight trains. They passed constantly and we seriously questioned the location of our hotel (approx 100 feet from the rails) but had an oddly peaceful sleep, after consuming the WORST Tom Collins to ever be glassed. For those Gallup bartenders requiring reminder... that's gin, preferable in a clean glass, perhaps with ice and sour mix... not sweet and sour margarita mix. Thank you for holding the salt. I guess thats pretty exotic when shots and Budweiser are the norm.

Still, Gallup has its brighter offerings. You can buy a budda doll, barbie doll, crucifix, and shower curtain rings all from your seat at breakfast. The food really was VERY good.

Day Two we went West into Arizona. First stop - Painted Rock Visitor Center. I have a lovely picture of John looking at the map, another of him looking at the map some more. Sadly, neither actually shows any of the visitor center or painted rock... so I'm not going to post them. 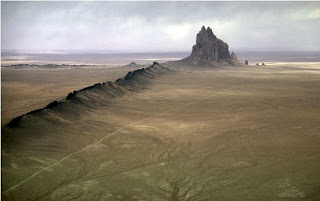 From painted rock we went North, deep into the Navajo Nation. AZ is very green along its boarder, and it often reminded me of riding through NH. John commented to me that his originally planned loop was a far shorter ride than he initally thought, and that "my monkey butt" permitting he wanted to do a slightly bigger loop. I had agreed, and on we went. We didn't count on John misinterpreting/missing the turn fault in part to his "scenery awestruck state of mind" and thusly found ourselves relatively close (200 miles) to the Utah border.

This "lucky" turn of fate brought us up over Buffalo Pass and down into Shiprock Valley. The picture posted here was taken from stock photography on the net. We drove perpendicular to the spine of rocks you see leading up the the Shiprock steaming away. John selected this photo as it clearly shows the dirt road "we could have taken" but chose not to out of respect for the angry red monkey living in my jeans. True Love. 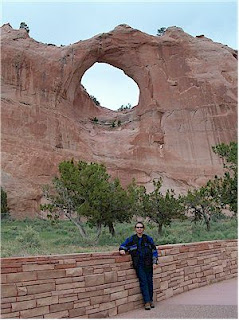 The ride down out of the twisting evergreen road over Buffalo Pass into the windswept sandy ocean populated with giant pirate ships of stone was breathtaking. No, we didn't take a single photo. I didn't need to - it was that good.

As I type this John walks in to tell me, map in hand, that we were "closer to Utah than I thought." We were 30 miles away, not the 200 initally reported. HA! This is why I love riding with him... adventure and happy accidents.

Day Three: Today we aimed to wander to Grants. We've been to Grants a couple of times before and had seen promotional material for "Fire & Ice - Volcano and Ice Caves" - always game for cool geological formations this was our goal. Along the way we stopped at Window Rock which as a beautiful Veteran's Memorial for the Windtalkers. 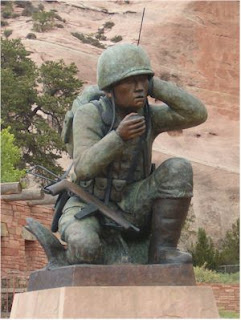 From here we rode through Carson National Forest. In one particular area there were incredible rock formations that shot straight up into the sky in narrow towers. Some were so thin and so tall you expected them to either blow or collapse in the wind. We took a couple of breaks in this area to simply enjoy the views. Our first break was in a little pull out next to one of these giant towers. Down at the base an artist had taken the time to carve out a perfect likeness of the rocks spirit. 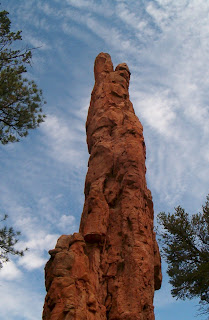 Our other break was "lake"side at what we are more likely to dub pond. The pull out road, boat landing and view reminded me of Ossipee. 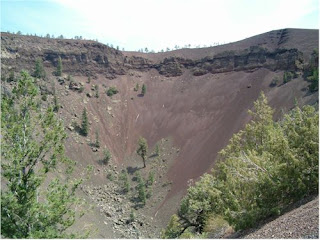 Later in the day we visited the volcano and ice caves. The walk up to the volcano rim was fascinating. The $7 per person brochure/ticket was our informative guide to volcanic formations, lightening attracting iron rich trees, mini ice holes, and lava types. The walk in the NM sun did wonders to impress the sorching power that formed this volcanic region. 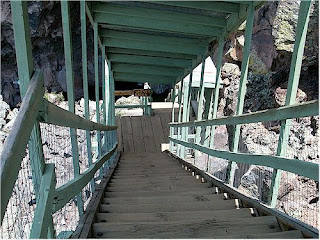 The ice caves, located only about a 1/2 mile from the volcano ridge we an equally amazing experience. We followed the foot path past more amazing lava formations and twisted trees to a staircase that leads down to the cave. At the top of the staircase the temperature was about 90 degrees. At the bottom, 31. 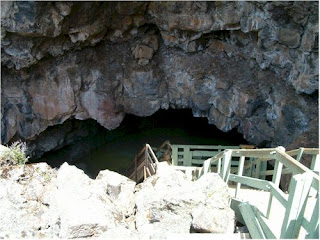 Mom - that little sign about halfway down the stairs say "UnEven Steps". Note: it's located about 13 steps too late.


It was the best kind of staircase. UnEven defined both the rise and treads, as well as the left to right horizontal placement in some areas. Repairs were additional boards nailed on over the broken parts of the original. Limited rail and spectacular overhead views of jagged rocky declines were a shocking contrast to the equally scary taxi ride I took from Navy Pier to Midway Airport only days before. The taxi ride was actually scarier, but I was laughing to hard at my co-fare screaming with fear to realize it at the time.

Apparently the store/admission office area used to be the dancehall / saloon and they actually did store their beer down there.

I was happy to see my own bed again late the next day, and the dogs were even happier to see us.

And that concludes this episode of Road Trip.
at July 13, 2008 No comments: