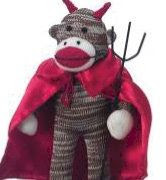 Sam will be arriving Thursday.  He'll be attending soccer camp for two weeks this year.  He's really excited about it.  They have a pool at the soccer field, so he'll be getting in some swim time as well.   I'm hoping that the monsoons affect mainly the late afternoons so that he can fully enjoy the camp.  They have a cancellation policy for inclement weather, so he may end up spending some time in the nutrition office with me.  I'll be taking a week off from work for Sam's third week.  We don't have any firm plans yet, but I'm sure we'll figure out some fun things to do.
at July 09, 2011 No comments: