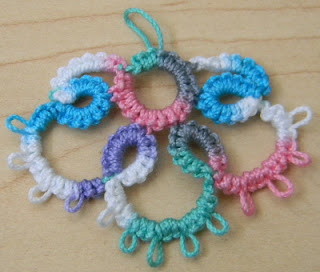 I've always wanted to learn to tat.  I've tried several times over the years to teach myself to tat with an old shuttle that had been either my Great-Grandmother's or my Great-Aunt's.  I'm not sure which one of them was the tatter, although my guess is my Great-Grandmother.  Regardless, my attempts were not successful.

Recently a friend showed me needle tatting, which immediately made sense to me.  I ordered a selection of tatting needles, which came with some sample threads, and purchased a pattern book. When the needles arrived, I turned on YouTube and found a tutorial.  The picture on the left represents my first effort.

The thread color is nothing I'd choose for myself. Honestly, I don't like variegated threads for tatting.  I do like the look of two color work, and hope to build my skills up to that.

I showed this little bit off to my husband, all proud that I'd managed to make something other than a string of misplaced knots.  He chuckled and told me he expected I'd be designing new patterns within the next couple of weeks.  I'm really lucky to have someone so supportive in my life who truly believes I can do anything.

So, the adventure begins.  I have some lofty tatting goals/dreams.  I'd love to make a bag, and I want to make a mask.  I've seen some really beautiful masks, and I have a artist friend that would really enjoy that as a gift.  We'll see.  In the meantime, I'll be adding "tatting" to my blog - you'll be able to shortcut to tatting posts by clicking "Tatting" under topics on the right.

And yes, I've already been charting a lace edging design. What can I say? I have to do something while my wrist heals.
at August 18, 2013

Email ThisBlogThis!Share to TwitterShare to FacebookShare to Pinterest
Labels: Tatting