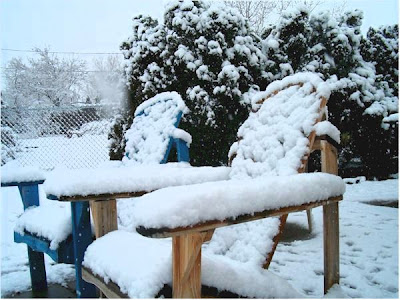 The Winter Weather Advisory became a Winter Storm Warning with accumulation estimates of 3-10" in our area. We saw early showers that accumulated then melted away. At about noon, the serious stuff started and this picture, taken about 2pm shows us well on our way to the first 3".

I expect to see about 6" considering the snow fall that continues, and the weather band we see on the doppler.

It looks so much like Maine. Funny, I thought moving here was going to stop me from having to shovel. 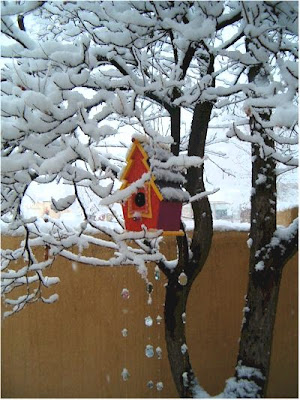 I'm late in sending out presents this year. Some of my family will receive gifts after the holiday. There's just no helping it. Some things were late in getting finished, others were late in arriving here. Now the Post Office is giving no guarentees on delivery, and honestly, my local Post Office is so messed up, it's a wonder anything gets where it's supposed to. Most Monday's we don't get delivery until after 6pm.

Our local paper would make you laugh. They suggested we start a letter writing campaign to the Post Office General to express the delivery and lost mail problems with our local office.

Seems kinda like we could call him and tell him we'd done this letter writing campaign (without actually doing any writing) and make a stronger point. Either way, he wouldn't get the letters.