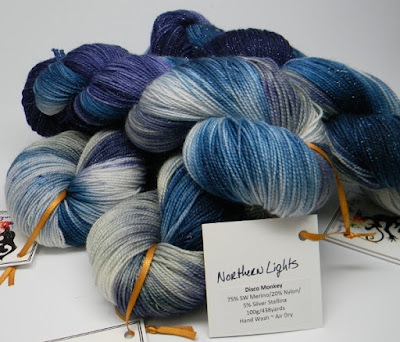 I grew up in Maine, and even in southern Maine, on the rare occasion you can catch a faint glimpse of the dancing lights in the sky caused by colliding electrically charged particles entering the Earth's atmosphere over the north pole known as the Aurora Borealis, or Northern Lights.

Now the faint displays are nothing like the vibrant pictures of this phenomenon you can find in your google search, but there were a couple of occasions that I remember being awe inspiring and even a little scary. What was this magic that caused what looked like blue fire in the sky? I'm older than google, so at that time, I didn't have the answer in the palm of my hand.

"Northern Lights" is my interpretation of the aurora borealis. I intentionally used my Disco Monkey base in this colorway's creation due to its stellina content, which provides me a starry sky. I layer multiple blues, being sure to leave some white, silver and grey for the brightest of flashes. Knit up into socks, the colors chase each other around in a spiral, mimicking the swirling flashes of color I saw in the northern skies.
at December 16, 2017