So what have we done all winter?  Nothing too exciting.  Lots of knitting, reading and waiting for the return of good weather. 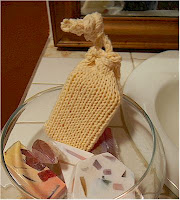 I've spent a large junk of winter knitting.  January was dedicated only to finishing projects meant for me, as I often knit for everyone but myself.  February I focused on my pattern design work and managed to release three new designs.  I also tinkered around with some new techniques - I learned to dye wool with KoolAid and did some felting.  March was also a good month for learning new techniques, including lace work, and seeking ways to further improve my craft.  I'm looking at taking the Master Knitter Certification course, and hopefully continue on to the Teacher Certification.  April 2nd I secured my first teaching gig down at the local yarn store.  Details are on my knitting blog - which sadly, I'm better at keeping up to date. 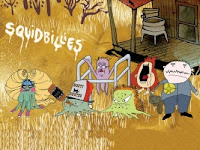 John also spent a good chunk of time knitting.  One day he up and decided to learn.  In two short hours I had him casting on, knitting, purling, working as the row below, and even cabling.  He is a natural.  He has since completed a shower soap bag, worked in the round on double pointed needles, complete with yarn overs and an i-cord drawstring (see pic above).  Currently he's working on a squid. Yes, a squid.  Complete with a mullet.  John is recreating Rusty, a cartoon character from one of our favorite guilty pleasures "Squid Billies" (he's the 4th squid from the left).  The show is a riot and John's recreation of Rusty is fantastic.  He has plans to do the major cast.
March 6th we planted broccoli, spinach and lettuce in tubs in the house.  All are coming up nicely.  Lettuce will be ready for harvest beginning in another week. 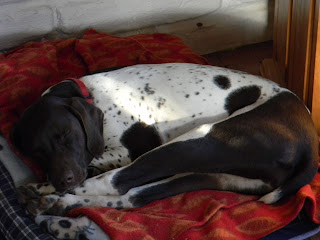 March 19th we sourced our seeds and potato starters and planted Raspberries, a Semi-Dwarf Cherry Tree and a Bartlett Pear in our continuing effort to become more self-sufficient in our food.  Haley totally doesn't understand the garden yet, and honestly I'm afraid of the day she figures out there is food in there.  She is a devil.  She loves to dig.  When we planted the trees we fenced them in with leftover plastic fencing from a couple of years back.  Within a couple days she had shredded the fencing and John had to replace it with chicken wire.  She got a solid scolding.  She's dug around the fence a little since, but nothing like the damage she initially did.  For the most part now she is focused on the compost bin.  We will need to modify that again to keep her out.  She's done major damage to a couple of other trees, jumping and tugging.  I think she does it more chasing birds than for any interest in the tree itself.  We are absolutely amazed at the damage she did to the rosebush - more so due to the volume of huge thorns and lack of damage to Haley than anything.  She looks all sweet and innocent, but you turn your back and she becomes one rough tough non-stop destruction tool.

John's got the bikes about ready to go.  He needs to get the shock rebuilt on his dirtbike, but may be delaying that project for now.  The need to get out and play is overwhelming.  The weather has been tricky.  We did have one deep freeze this year that killed off trees and shrubs.  We'll be addressing that once we kick back into our farming activities.  For now we are waiting to see the extent of recovery if any, and holding off for the last frost.  Until then, some days are gorgeous - we've already seen 85 degrees, and some are dismal - hardly breaking 45 degrees.  We've taken Haley on her first hike - only took a couple miles to get the hang of her harness.  John's been taking his mountain bike out in the afternoons after work.  I've even taken to going for walks during my lunch break. 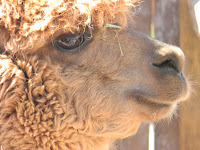 April 2nd I joined one of my knit groups on a field trip to the local Alpaca farm, and discovered which wool I'm allergic to.  I've always had a problem with wool, and really stuck close to acrylic to avoid discomfort, but now I know definitively it is Alpaca that I'm allergic to, and need only to avoid yarns and blends.  It's a shame really.  Alpaca is amazingly soft and the animals themselves are delightful.  There will eventually be more on my knitting blog about the trip if you are interested in pictures.

Soon we will be breaking out of hibernation.  I look forward to summer and motorcycling again.  It's just a matter of waiting out the high winds and sand storms now as temperatures continue to climb.
at April 05, 2011