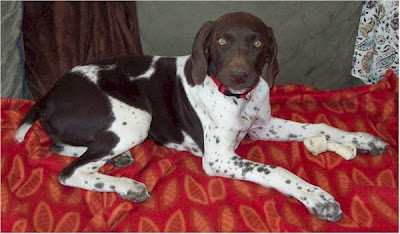 We've found a name - Haley (Hay-Lee).  She has settled in very nicely with Stinky and Chica, and even managed to learn "Sit" in her first week.  In house accidents have been kept to a minimum (3 total).  We had to purchase a specially shaped bowl to slow her eating.  It seems to be working so far - we've actually heard her chew a few pieces rather than just gulping!  She has been teething, but there are a million toys and rawhide for that.  Nothing has been inappropriately chewed, but for the occasional arm, hand, finger and John's hair.  She loves balls and ANY toy with a squeaker - squeakers are the BEST!!!  She had her first bath last night and, like Stinky, she pretty well hates water.  Haley is an "All or Nothing" kind of girl - she's either fully alert and running about, obsessed with a squeaker toy, or dead asleep.  She is very fond of John (he has a way with the ladies) and is convinced the sofa is hers. 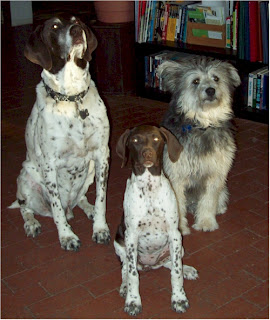