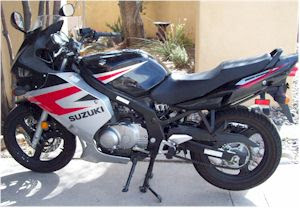 There is something about us... something that just calls to us, lures us into purchasing vehicles in April. Last April John bought his truck, and I bought my dual sport. This year "we" bought this guy - 2005 Suzuki GS500f. The concept is we will share it until John either fixes up the RZ or buys another street bike. Although it's a little rough, and could use some parts, it's in decent shape and only has 3500 miles on it. It was a good deal. I look forward to getting it on the road, as does John!
I suggested to John that we could actually go for a ride on it together. He looked at me like I was growing a second head. "Do you really want to ride b*tch again?!? I wouldn't want to after being what you've been through." John references the TWO years I rode on the back of his dualsport (Mom, dual sports DO NOT offer ANY form of comfort to riders, PERIOD. It's not foam you sit on, it's frame. Ask Bob.) I just like excuses to hold my man.
at April 10, 2010

Email ThisBlogThis!Share to TwitterShare to FacebookShare to Pinterest
Labels: Adventures in New Mexico, Home and Family